Having lived in Scotland, I’m a bit homesick around Hogmanay… tonight will be loud and cheerful throughout Scotland, rain or not.  So to ease my homesickness, here’s a wee touch o’ Bonnie Scotland.  Happy Hogmanay, everyone!

Traditionally, Scottish shortbread is either broken off in pieces from one large slab, or scored with a knife before baking into ~1/2 inch “fingers” to break off after baking; scoring into “pie” shaped pieces is also common.  I’ve made it as a large sheet scored, the traditional shape that says “shortbread” to me.  For the best results, use real, fresh butter; margarine does not count.  After all, if you’re going to make it, do it right!

Cream butter until white with a mixer.  Add brown sugar & salt.  Beat very well.  Add flour.  Beat with a dough hook.  Drop cookies on cookie sheets with teaspoon. Pierce with a fork or toothpick at even intervals to keep them flat while baking. Bake @ 150°C for 15–20 minutes.  Do not brown, or they will become too dry.

Cream butter & brown sugar with a fork until well mixed.  Add salt & mix.  Add 3 ½ C. of flour, & mix with fork.  Use the remaining flour while rolling out into a sheet.  Turn out dough & knead for 5–10 minutes until well mixed with an even consistency.  Roll out to ¼” & cut cookies, either with cookie cutters, or by scoring with a knife.  Pierce with a fork or toothpick at even intervals to keep them flat while baking.  Bake @ 150°C for 20–25 minutes.  Do not brown.

And surely ye’ll be your pint-stowp!
and surely I’ll be mine!
And we’ll tak a cup o’ kindness yet,
for auld lang syne.

We twa hae run about the braes,
and pu’d the gowans fine;
But we’ve wander’d mony a weary fit,
sin auld lang syne.

We twa hae paidl’d i’ the burn,
frae morning sun till dine;
But seas between us braid hae roar’d
sin auld lang syne.

And there’s a hand, my trusty fiere!
and gie’s a hand o’ thine!
And we’ll tak a right gude-willy waught,
for auld lang syne.

With winter upon us and Christmas just passed, New Year’s Eve approaches… and my thoughts always turn to Wassail.  A batch of this simmering on the stove has filled my home with a wonderful aroma, and nothing quite tops sipping this hot, ladled into my favourite mug straight from the pot on the stove.

There are two drinks associated with wassailing; the most famous is the Wassail itself, while the second is a variation called “Lamb’s Wool.”

Wassail has been around longer than written history:  It came into English via the Vikings, the word itself being a corruption of the Old Norse salutation, “Ves Heill”, or “be healthy”.  As a phrase associated with drinking, it arose among the Danes (i.e. Vikings) that settled in England.  Around 1300 the sense was expanded to refer to the drink itself, and from there to the carousal associated with it (it was, after all, made from spiced, warmed ale), to the custom of going carolling from house to house around the Christmas season.

This first recipe for Wassail is the one simmering on my stove, tried and tweaked to personal taste over the years.  This recipe is a modern version of the ancient one; if you want to go traditional, feel free to grow the apples yourself, juice them, and fight the bees off for your own honey…

Mix these two proportions to taste (It should be decidedly more cidery than citrusy).

One orange, studded with whole cloves and sliced in half, to float in the mixture. (To easily stud it, pre-pierce the orange skin with a toothpick, and then insert the clove.)

tea bags, e.g.”Apple &  cinnamon”, Winter Spice tea, etc. (If I add these, I put them in a spice infuser ball to avoid them being scooped up into a drink – along with the nutmeg, and if you wish, the cinnamon sticks as well, though it’s nice to see floaty bits in the pot as you serve!)

apple slices, to float in the drink as it simmers

Bung everything into a large pot at least half an hour before serving, &  let it simmer on low heat.  The longer it simmers, the better it gets!

This Lamb’s Wool recipe is from the Renaissance period of England’s history, though chances are it goes much further back.  Apple, ginger and ale gently dominate the taste of the drink.  Its name is probably due to the frothy appearance of its whipped mixture, though it has also been speculated that the name originates in the ancient Celtic festival of “La mas ubal” (“the Day of the Apple”), pronounced “lamasool”.  Either way, it’s a tasty variation to Wassail.

6 apples, cored (Bramley apples for a tart taste, or any sweet apple to taste)

Preheat the oven 120°C (250°F). Prepare the apples in advance so that they’re ready when you want to put them into the Lamb’s Wool:   Core the 6 apples, removing the pips. Lightly grease a baking tray and place them about 6 cm (2 inches) apart as they tend to swell up a little. Bake the apples for about an hour or so, until they become pulpy and the skins peel away easily.

In a thick bottomed saucepan (large enough to avoid splashes while whisking):  Pour in the sugar and cover with a small amount of the ale / cider; heat gently.  Stir continuously until the sugar is completely dissolved, then add the ground ginger and grate in the whole nutmeg (or add in the powdered spice). Stir, keeping the pan on a gentle simmer; slowly add in the rest of the ale / cider. Simmer for 10 minutes on a gentle heat as you prepare the apples.

Remove the apples from the oven and cool slightly (~ 10 minutes).  Scoop out the baked apple flesh into a bowl and discard the skin. Mash this apple pulp with a fork while it is still warm into a smooth purée.  Add this purée to the Lamb’s Wool, mixing it in with a whisk.

Simmer the Lamb’s Wool for at least thirty minutes before serving to allow the flavours to marry. Before serving, whisk the mixture either by hand or with a blender to froth up the drink well (creating the “lamb’s wool”).  [Before these tools came along, the drinks were traditionally poured back and forth between two large serving jugs to force air bubbles into the froth.]

Ladle the hot Lamb’s Wool into mugs or heat-proof glasses and sprinkle a bit of nutmeg on top.  If wassailing, pour it into a large bowl with several pieces of toast in the bottom, as the “sop”.

My husband goes on a hike in the Swiss Alps any chance he gets.  He’s also a member of the SAC (Swiss Alpine Club), and their beautiful, glossy magazine tides him over until he can go once again.  The following recipe was in their magazine, Die Alpen, August 2012, and I’ve translated it for you.  If you’re not sure about the conversions, just go to Google and type in “gram to ounce conversion” – it will pop up a handy conversion calculator!  These babies are packed full of energy for hikes; I made some for my hubby’s hike this past autumn; they were a hit, they hold up well in a backpack, and they can last (and last); a little goes a long way!

Dry roast the oats, sunflower seeds and nuts on high heat in a pan, until it’s nice and crispy. Cool.
Mix the rest of the ingredients into the dry mix. Drop onto a baking tray by the tablespoonful and form to round balls. Bake at 200°C for 15 minutes.

It’s cold outside here in Switzerland; after nearly a half metre of snow earlier this week, it was all melted away due to a few measly degrees that turned the snow to rain and washed it all away!  I only gave up hope for a white Christmas when the (VERY accurate) Swiss Meteo prognosed 8°C for Monday… but no matter.  It’s still cold enough to enjoy a Swiss raclette once in a while.  After years of making it, I’ve made a shopping list / recipe to remind me what I’ll need, and how much.  I’ll share the recipe, and then at the end I’ll give you a few tips and tricks to make the meal a huge hit.

FOR THE GRILL / SHOVELS:

rolled sausages – either small individual ones, or large ones “coined” (amount per person is up to your guests – have a generous supply)

eggs – scrambled, in a small container to pour into onion rings on the grill

fresh mushrooms (Large, sliced; small ones can be left whole or halved) – for grill top and cheese shovels

sliced cherry tomatoes (for both grill top and shovels)

Cranberry sauce – served as a condiment

Kirsch – in a sprinkle bottle, for people to sprinkle on their potatoes if they wish.

Camembert cheese with baguette instead of potatoes

Tips & Tricks:  If there are vegetarians among you, grease the grill with a bit of your preferred oil rather than with bacon strips.  Add the oil at the beginning for grill-top veggies (& meats), and occasionally add as needed (mushrooms and fried eggs soak it up fast).

Serve it with a robust chilled white wine (Fendant or Riesling are both suitable), and / or hot tea.  Any other drink tends to react with the cheese in an unpleasant after-effect!

Raclette ovens can be found on any shopping site worth their salt; if you live in a region of the world where winters (or summers, for you southies) are cold and long, it’s definitely worth adding to your kitchen supplies! 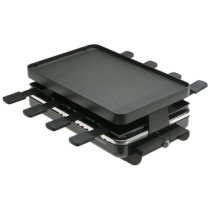 Available on Amazon in Kindle and Paperback 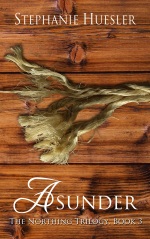 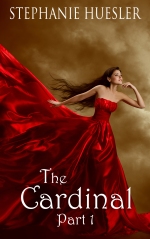